“There exists in St. Petersburg a powerful foe … This foe is no other than the Northern cold … At nine o’clock in the morning… it begins to bestow such powerful and piercing nips on all noses … At an hour when the foreheads of even those who occupy exalted positions ache with the cold, and tears start to their eyes, the poor titular councillors are sometimes quite unprotected. Their only salvation lies in traversing as quickly as possible, in their thin little cloaks, five or six streets, and then warming their feet in the porter’s room, and so thawing all their talents and qualifications for official service, which had become frozen on the way.”

The Overcoat by Nikolai Gogol

Like characters in a winter fairytale, we’d had our fill of mulled wine and turkey, opened our presents, wished our friends and family a Merry Christmas and gone home to pack our passports and winter woolies. Early on the 26th, we made our way to Heathrow to catch our flight to St Petersburg.

When we booked our trip to St Petersburg back in September, I allowed myself to dream of a magical storybook land of romance and wonder, covered in a foot of white, fluffy snow. This, Hubby assured me, was a given. I’d read some of the drama of Pushkin’s Eugene Onegin and could picture Gogol’s beloved frost-bitten Petersburg with all it’s delightful Russian characters. Thermal underwear, merino wool socks, earmuffs, proper winter coat and woollen hat at the ready!

On the train to the airport, however, Boxing Day weather predictions for the northern hemisphere, read as follows: London: 14 degC, New York: 18 degC and St Petersburg: -2 degC.

My picture perfect postcard image of the snowy motherland was not looking promising. On arrival at Pulkovo Airport there was however a distinct chill in the air and I believe I spent the rest of our time in St Petersburg willing the heavens to produce the beautiful white stuff I so coveted. Chin up! Despite the lack of падающий снег (falling snow), I was not perturbed. There is another aspect of Russia that has ever fascinated me. The people.

Fyodor Dostoyevsky is believed to have said: “We all came out of Gogol’s ‘Overcoat’.”

And so I began to search for the red-headed, doomed but determined copyist, Akaky Akakievich; the austere Person of Consequence booming “Do you know who I am???”; the poor tailer, Petrovich; the elderly Landlady of Bashmachkin who advises Akaky to report the theft and the policemen who must investigate the fearsome apparition who haunts the bridges of Petersburg violently grabbing at the coats of passersby.

This was no mean task as the western world has already got its parasitic claws on St Petersburg to some extent. But if you’re a seasoned people-watcher like myself then you will find all of these and more.

You will recognise the pinched look on the face of the silent passport control officer as he inspects your visa. You will wonder at the sad expression of the elderly man with red cheeks and bulbous nose in his distinctive soviet hat. You will hold your smiles at the austere tone of the lady in the train station ticket office, grumpily pointing to the sign on the glass separating us, which declares, ‘There is no first class on this train‘. You will engage with the sometimes joking, sometimes serious babushka in the immense cloak room as she insists that you remove that last warm layer you were actually planning to hold onto. And as you slowly decend into the belly of the underground to catch the metro, you will instinctively avoid eye contact with the uniformed watcher in the booth – a haunting remnant from Soviet days. They are all there – every wonderful character in glorious detail.

I could go on for some time about St Petersburg – its art, theatre, museums, palaces, Nevsky Prospect, exquisite and moving gospel mosaics in the orthodox churches, the food, learning to read Cyrillic, stories of the siege of Leningrad or mad, extravagant emperors. Instead I’ll limit myself to four things: The babushki, the generous heart of Russian friends, the frozen lakes and rivers, and the emphatic altogether unprompted advice of strangers.

The Russian Babushki are a phenomena.

If you Google them you will see some expressive worn faces staring back at you. Oh how delightfully the word rolls around the mouth – ‘Babooshka’, ‘baboushka’, ‘babushka’, or ‘бабушка’ – pronounced with emphasis on the first syllable – ‘BAH–boushka’. What I discovered about Russia, albeit in my limited experience of Санкт-Петербург (Saint Petersburg) and Великий Новгород (Novgorod The Great), is that these ‘gangsta grannies’ rule.

Old to elderly, small, round, ruddy-cheeked, be-headscarf-ed, ferocious on the outside yet soft underneath – the babushki run Russia. Without them the museums, cloak rooms, some stations, flower and fruit stalls and public toilets would have to shut down (the latter I don’t have a problem with). They do not speak English (even though some presumably can). They are all-seeing and most importantly, formidable! 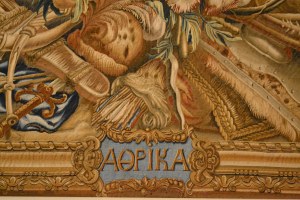 Hubby, however, had the babushka eating out of his hands and vying for his attention. As a fluent Russian speaker with almost no accent, he frequently began by quietly asking a few questions about the Siberian display in the Hermitage or directions to his favourite painting in the Russian Museum. Within seconds in this polite, gentle manner he had cracked their frosty veneers. They cannot work him out so they have to keep him talking – it’s too impolite to ask direct questions. All of a sudden he can get away with teasing and compliments – they love it. 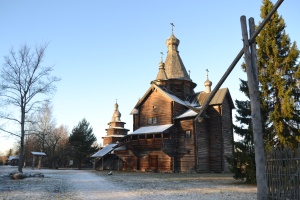 Our first piece of unsolicited advice came from a babushka in Novgorod.

We were at an outdoor museum. By this stage my prayers about the cold weather had begun to come true. Each house was guarded by a babushka. The colder the dwelling, the grumpier the babushka – I must say that occasionally there was one my Hubby couldn’t crack and it all seemed eerily connected with the temperature. We entered a small partially warm building composing of about 3 rooms displaying artefacts and scenes of how the poor people lived in ancient times. A rather bossy babushka was following us around turning the heat and lights on and off as we moved from room to room. She grudgingly answered a few questions and this simple process seemed to warm her up somewhat. Finally, arm in arm Hubby and I walked to the final display and hot on our tails, this little babushka, not much bigger than me, cornered us.

“Look after your little wife, she’s very small and vulnerable!” she said to Hubby in Russian, repeating herself and raising her voice for emphasis. Hubby took this emissary so seriously that for the rest of the day I was tended to in every way imaginable – bags carried, doors opened, hand held and checked on repeatedly 🙂 – you don’t cross a babushka.

Our second piece of advice came from an altogether different source. On a long train trip back to St Petersburg, Hubby and I watched a British detective/comedy series, Death in Paradise, on his iPad. The whole time, a strange, slightly greasy-haired young man stole glances at us. This made us uneasy at first, but we soon forgot about him so it was a huge surprise when, reaching our destination and leaving the train:

Strange man: ko$hai%eu##gh@aiogha (unintelligible)
Hubby: Excuse me?
Strange man: Yourrr wife! She must wearrr a hat! She will catch cold. A hat! Plllisss! (loud and quite agitated)
Me: I have a hat! (holding up my woollen hat – I was wearing earmuffs)
Strange man: Wear it! (louder)
Me: I will!
Strange man: Ok!
Me: Thank you (as loud as he by now)
Me: Спасибо! (me very loud now)
Strange man: Ok! (walks off happy)

I believe I was told! 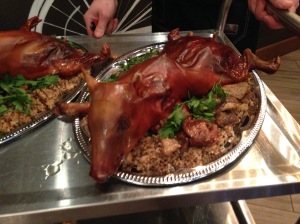 Culturally, Russia is a strange place to figure out. Friends will give you the coat off their backs. Strangers won’t give you ice in winter – unless you manage to crack their hard outer shell (as with the babushkas). We had the opportunity to go to the staff Christmas party of dear colleagues during our stay. Expecting to be forced to drink vodka, I pleaded teetotal. We arrived at 4pm and there was a lovely spread of luxury food already laid out on the table including oysters, sturgeon, meats, fruit and cheeses. I began with the oysters. I ate gratefully and sensibly, enjoying the tastes, the laughs, stories and hospitality. Unfortunately I did not realise at that stage that I was enjoying round 1 of about 7 courses of food. When courses 2, 3 and 4 came around I’d lost my ability to think rationally let alone to eat. I began to panic. We had, by that stage been there for 4 hours when the whole roast suckling pigs made their dramatic appearance. “Eat. Eat,” they said.

Another hour later Father Frost and his Snow Maiden arrived in full costume to entertain us and the dancing started. Another course, this time prawns and scallops, were placed in front of me. I looked at Hubby with what I’m sure was a frightened look. “Just have a taste,” he encouraged me. 6 hours into the party a waiter came around: “Steak or fish?” he insisted. I was only able to shake my head. Giving Hubby a knowing look, we got up from the table and began to say our goodbyes.

As we were reapplying our layers for the outdoors one of our dear Russian friends approached:

I was overwhelmed by the generosity of our Russian hosts. They booked us ballet and opera tickets at the Mariinsky Theatre (foreigners are charged more so this really helped), ferried us around at times, gave us many generous gifts and hosted us for New Year’s Eve.

And finally, though I only got a few small flurries of snow, I did get my cold weather. The River Neva slowly iced up. Hubby and I stood for ages on the Dvortsovyy Most at the Winter Palace watching huge sheets of ice crash against the bridge uprights as they made their way along with the freezing water (see video below). Like watching a fire at night, this was mesmerising. On our last day the temperature dropped to -16 degC and like an excited child, I had my very first walk on a frozen lake.

What a feeling to walk on water!

SMALL PRINT
P.s. I’ve been tempted at times to count my stopover in Moscow airport on the way to China in 2004 as my first time in Russia, but I’ll gratefully relinquish that now.
P.p.s. Can you work out this Cyrillic, best said in a heavy Russian accent?

3 thoughts on “St Petersburg: gangsta grannies, advice unsought and a chance to walk on water”