“Monsieur is going to leave ‘ome?” “Yes,” returned Phileas Fogg. “We are going round the world.”

“…why, I’ve just this instant found out… that we might have gone around the world in only seventy-eight days.”

Around the World in Eighty Days by Jules Verne

50 flights per day cancelled. Some cancellations last minute (case in point – us). Some 400,000 passengers grounded. Ryanair has caused a bit of a stink in the airways lately.

We went to a wedding in Tallinn and threw in a round-the-world trip! This fly-by weekend ‘break’ was my first visit to the Baltic States.

Estonia is small, neat country in the Gulf of Finland. It’s Northern European, predominantly white, has a ratio of 2.19:1 women to men, has 2,222 islands and islets in the Baltic, invented Skype, has the highest adult literacy rate in the world (99.8%), a declining population, lots of space and enjoys the non-olympic sport of Wife Carrying!

The hp district of Tallinn

Cosy blankets are everywhere in Tallinn

Riga, capital of Latvia, has, over the past 500 years been occupied by the Poles, Swedes, Russians, Soviets, Germans, Soviets, Germans, with some independence thrown in here and there. There is a Soviet feel about the people most speaking Russian as a second language.The city is colourful, clean, cobbled and architecturally beautiful. The food is fishy (in a good literal way).

Stalin building – one of just 13 left in the world

Spring still in the air for one more day

Mushrooms in the forest (the poisonous kind) 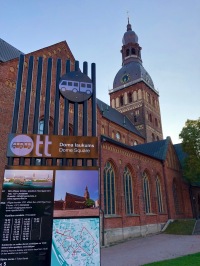 Statue of the knight Roland 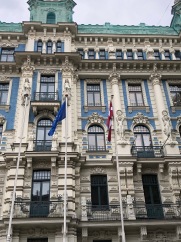 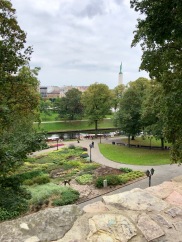 Park – looking out onto the Freedom monument 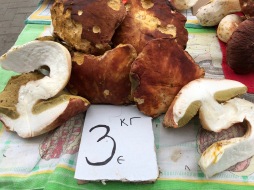 Food market Riga- Too fishy for me

Fancy tea with friends before we left Riga

It’s the Autumn Equinox. Back at home Hubby and I attended the annual Chilli Fest at our local allotment.

I eyed a bowl of milk chocolate squares beside a tray marked ‘extreme’. “Try the Bahamas Goat,” said the man chopping chillies. He indicated a finely-chopped orange variety. “What’s the chocolate for?” I asked. “You’ll need the chocolate after you’ve tasted the Goat,” he smiled. Hubby was already on his 3rd tasting from the ‘extreme’ tray. “This one gets you in the throat,” I heard him say, his face red and tears in his eyes. I passed him the chocolate bowl. All in all a lovely torturous hour spent among some of my favourite colours of the season.

The colours of Autumn and chillies

P.s. Question: Why are there only 3 countries called ‘The Baltic States’ when there are 10 countries on the Baltic Sea? Answer: I don’t get it!
P.p.s. Estonian is a language for which I have absolutely no reference. We could not discern a single word at the wedding or the reception.
P.p.p.s. At the wedding reception in Tallinn we sat next to a famous Estonian mezzo soprano (that’s opera ;)). A  little star-struck, we Googled her when we got home: Helen Lokuta.
P.p.p.p.s. We returned to Riga the following weekend for the opening of the Latvian Biblical Centre. We have been supporting the reclamation/rebuild of this 4 story building for 5 years. Once a Bible College attended by Evangelist William Fetler (1883-1957), it was captured in 1940 by the Soviets and turned into apartments. It was left to ruin. Now it has been returned to it’s original purpose.
P.p.p.p.p.s. One more country to visit in the Baltic – Lithuania. But for now it’s #homesweethome
P.p.p.p.p.p.s. Incidentally, we did work out that the Estonian word for ‘shop’ is ‘pood’: ‘Teepood’, ‘Linenpood’, ‘Suveniiripood’ etc.

One thought on “Autumn Equinox, Hot Chilli and a Round-the-World trip through The Baltics”