“One thing I’ve learned in my brief career: It’s the side projects that really take off. By side projects I mean the stuff that you thought was just messing around. Stuff that’s just play. That’s actually the good stuff. That’s when the magic happens.”

My English ancestors sailed on the HMS Weymouth from Portsmouth to Algoa Bay in 1820. They were from Burton-in-Kendal, Evlestoke and Guildford. An out of work labourer, a weaver, a wife. It took them 6 months to get there. Their hope: to reinvent themselves in a new country.

Many births, deaths and marriages later, I turned up.

I had a privileged, colonial upbringing. Good schools. Good manners. Good books. My English accent was corrected by my maternal grandmother. Summers were spent at the sea, winters in the game reserve.

Mother England I’m sure, was proud of her colonial child.

What those bedraggled settlers on HMS Weymouth did not anticipate, filled as they were with Nyamazela-ness, was the pull of Mother England and her ever-present aspiration to the middle classes.

Consequently, when I aspired to be a grown up, there were but five ‘professions’ on offer:

“Young man become a doctor, a lawyer, an accountant!” “Young lady, how about nursing? Or even better, become a teacher – you’ll have holidays with your children!”

Children? That’s another story, I digress …

So I became a teacher …  en suite I left teaching and did some acting … après ça I turned to writing about films and theatre (Stories – my one true love beside Hubby!).

I guess I’m a mis-fit. I never really found that one worthy, professional, important thing I was ‘meant for’.

Now, together with Hubby I run (try to run) a small business. There, I use people-management skills from teaching; for marketing I draw on my years of film reviews; and somehow I’ve picked up some of Dad’s accounting skills, which help me to run the company finances.

I’m some kind of awkward patchwork quilt of all of my previous work.

This brings me to the ‘side project’ … our house build in South Africa.

If I could meet that little girl in the Aptitude test with the guidance counselor, I’d tell her to pick architecture or building or interior design …

Maybe it’s the 40’s? Maybe I’m a dreamer? Don’t you think we should all have the chance to reinvent ourselves a couple of times in our lifetimes?

Without further adieu, the building story so far …

Before it all started. 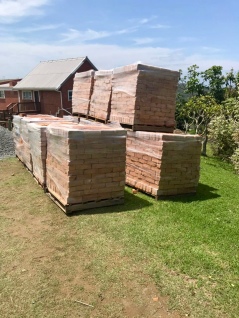 The on site spy.

Identifying trees and watching the walls go up. 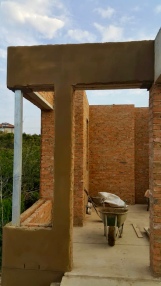 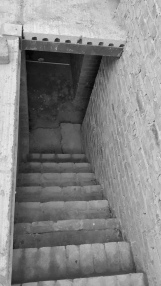 Steps to the wine cellar.

View from the first floor. 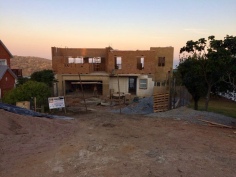 Sunset on our property.

SMALL PRINT:
P.s. My maternal grandmother (#loveyougranny), who also reads this blog, preferred us to say ‘mum’ not ‘mom’, and ‘yes’ not ‘ya’. I’m certain I speak better because of her. She is of French decent, so she possibly also instilled in me a love for French.
P.p.s. I don’t resent my childhood. I had a wonderful childhood. The only aspersions Mother England might possibly cast my way, is that most of my little life was conducted barefoot! So uncouth!
P.p.p.s. Hubby got pretty tired after full days with the builder choosing tiles, meeting with the joiner and staring at lamp fittings, but where he really shone was with tree identification and garden planning. He’s become a fierce indigenous-fundi. We discovered that we have a cycad on our plot of land… more on that another time.
P.p.p.p.s. Colonisation is a rather ugly word now and some terrible abuses were done in the process. I’m not advocating colonisation, just calling a spade a spade. I don’t mean to upset anyone. Forgive me if I have.
P.p.p.p.p.s. My English family formed part of the Ford Party on the HMS Weymouth to South Africa – they and many others are commonly known as the 1820 Settlers.